I had a doozy of a weird dream a couple of nights back, so I thought I’d bring back what is undoubtedly one of the easiest-to-write features in the history of this blog. Basically I describe two dreams, and you have to guess which one was the real dream, and which one I made up in my waking hours as a strange sort of creative writing exercise. Here goes!

Dream One – The Hobbit in the Nutri-Grain Hat

Dream where Beyond Studios were filming a version of The Hobbit starring me as Bilbo Baggins. We were about to shoot the scene with all the dwarves invading Bag End (which seemed to just be filmed at someone’s flat) when I suddenly decided Bilbo shouldn’t be bald, so I made the hasty suggestion that I should wear a hat made from a Nutri-Grain box, which for some reason everyone went along with. So we filmed the whole scene like that, and I thought it went quite well.

Later, I began to have doubts about the Nutri-Grain hat, thinking it might distract attention from what was going on in the scenes. I found a curly brown wig under my bed and considered suggesting that we should either re-film the Bad End scene with me wearing that instead, or the Nutri-Grain hat could be digitally replaced in post, or we could start the next scene with me discarding the hat so I didn’t have to wear it for too long. But I didn’t have the nerve to suggest any of these ideas, so we just went ahead and filmed the next scene with the Nutri-Grain hat still on, and me feeling increasingly guilty for possibly screwing up the whole film.

Dream where my podcast Rainy Day Adventure Club was on its seventy-fifth episode, and to celebrate I invited back a bunch of guests from the past. The format seemed to have changed. There was no discernible adventure – we were just sitting around chatting in a room that looked a bit like the weird restaurant at the end of IKEA. At one point I joked that this was the Quarter Quell of RDAC and all the guests would have to fight to the death like in The Hunger Games. Everyone laughed way more at this than seemed realistic, and I began feeling bad because I thought they were just humouring me, and had been all along. Angry about this, I punched several of the guests in the face.

Later, in a seemingly unrelated part of the dream, I was about to skydive out of a plane with some other people but the man who I had thought was our instructor kept making weird comments that made me think he wasn’t a real skydiving instructor. He would make some off-putting comment like this, then reassure me he definitely was a skydiving instructor, then immediately make another off-putting comment. Eventually I decided I didn’t want to skydive, and as soon as I said this the plane started plummeting towards the ground. Thankfully I woke up before it got there.

There you go! Which of those was a real dream I had recently? Oh, and the answer to last time’s is: Seasickness Tablets was the real dream. Well done to my brother James for getting that right! He knows me too well.

For a while now, in a rather abstract, never-bothering-to-do-any-actual-research kind of way, I’ve been fascinated by the relationship between our conscious and unconscious minds. So as a creative exercise I decided to stage a little writing competition: me vs. my unconscious mind! I’m going to describe two dreams: one is a dream I have actually had, penned by my highly imaginative unconscious; the other is a fake dream I made up in my waking hours. See if you can guess which one is the real dream! Here we go!

Dream One – Crash Drink
I was in a supermarket a bit like Corstorphine Tesco. In the dream there was this Crash Bandicoot themed tropical fruit drink which came in ridiculously tall thin cans – called “two metre cans” because that’s how tall they were. (I think this was significant because that’s how tall Crash would be in real life.) Everyone loved this drink and was going on about how amazing it was, as if it was somehow going to change the world for the better. But it had just been banned or discontinued for some reason, and there was a profound sense of injustice and oppression around this, as if some dystopian government had needed to crush the drink before it started a revolution. When I got to the checkout with a few (now normal sized) cans, I was really worried that I would be arrested for even trying to buy it, but I made it out of the store without incident. I was happy about this, but also sad that the Crash drink would no longer be manufactured, and that some sort of hope for the world seemed to have been extinguished. There may also have been helicopters flying overhead at some point, which made the whole thing seem even more dystopian.

Dream Two – Seasickness Tablets
I was going on some sort of boat trip, and was trying to acquire some seasickness tablets before we set off (presumably to avoid a repeat of what I will only refer to as the Amsterdam incident). The first shop I tried was on the boat itself, and it claimed to sell seasickness tablets, but they looked more like weird sweets, and I didn’t trust that they actually were seasickness tablets. So I got off the boat and ended up in another shop, possibly the Boots near my house. All the staff somehow knew why I was there and laughed at me. I was a bit indignant for a minute, as it seemed perfectly reasonable that I should want to buy seasickness tablets, but eventually I realised their laughter was all in good fun. In fact it turned into a strangely heartwarming moment, where I felt accepted by them and by society as a whole.

There we go! Can you guess which dream was invented by my conscious mind, and which by my unconscious? And which one displays more imagination? That was a fun exercise, so I might do it again in the future, and when I do I will also tell you which of these was the real dream. Because it’s important that you know, you know?

For this post I’m going to try out more of a journal format. Instead of rambling on for ages about one thing, I’ll ramble briefly about a bunch of fairly unrelated things. If it turns out too disjointed and pointless I won’t do it again – just mixing things up because that’s the kind of crazy guy I am.

I’ve been working on Project Snails for three solid weeks! Go me! After a rocky end to last year, I had an equally boulderesque start to this one – was still recovering from Project Ho Ho Ho and writing the credits song for it which took way longer than it should have – but when I finally got my butt in gear and placed it on a chair in front of a computer with my novel open on it, I found a burst of creativity waiting for me. That’s the upside of taking an extended break from something, I suppose. When you immerse yourself so fully in a project, your unconscious carries on working even when you think you’re doing something else. 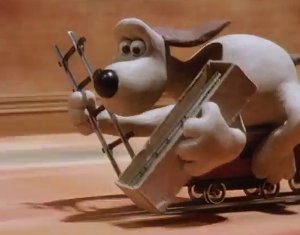 I’m now at 95,000 words in the latest draft. 100,000 is what I’m thinking of as the halfway mark, though considering how brutally I’ve been cutting stuff during this rewrite, I’ve probably passed the true halfway mark already. Everything’s going pretty well, though one major storyline is having to be so severely reimagined as I go that I feel as if I’m laying down railway track in front of a moving train à la Gromit in The Wrong Trousers. Also, I’m using Scrivener now. It’s pretty good, especially if you have lots of different chapters and drafts which you want to be able to quickly switch between and view side by side. Which I do. 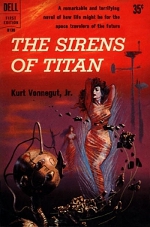 I’m not reading enough. As I’ve mentioned before, writing does this to me. The only book I’ve finished since my last book post is The Sirens of Titan by Kurt Vonnegut, so I might as well talk about that now. Having grown up ingesting The Hitch-Hiker’s Guide to the Galaxy in various forms, it’s hard not to read Sirens as a sort of precursor: wry science fiction (wryence fiction) where dysfunctional people get whisked off to various planets and moons and put in vaguely absurd situations by forces outside their control. In the process it captures some of the random, chaotic, weird beauty of life. Breathtaking imagination is on display, in for example the descriptions of the creatures that live on Mercury, and of the being called Salo; these passages ought to make most writers – myself included and emphasised – slightly ashamed of their own lack of imagination. Also, it’s nice to finally know what my parents were talking about when they used to go on about chronosynclastic infundibula. Nerds.

I’m watching the first season of In Treatment. If you haven’t heard of it, it’s a show which is set almost exclusively within the therapy sessions of several different people. The characters seem so real that it feels almost wrong to be spying on them at their most vulnerable, as the show invites us to. Its more intense episodes can leave you numb and in dire need of a hug. But your investment in the characters’ progress and the weekday-based episode structure draws you back. The music is great too.

I had an incredibly unsettling dream last week. It was framed as a trailer for a horror film, though I was actually experiencing it rather than watching it. I was wandering round an underground art gallery which seemed to have no exits but was quite full of people. All the paintings were fairly normal except for this creepy painting in one room which was of a woman with a messed up face (either she had a freakishly oversized mouth or there was just a hole where her face should be). Gentle, sad classical music was playing in the gallery but whenever I looked at the creepy painting it changed to disturbing, chaotic, dissonant strings. I tried to avoid looking at the painting, but as I walked around I kept hearing the music change as the painting entered my peripheral vision. After a while, bad things started to happen – people in the room with the painting started dying, other paintings started to change – but I don’t remember many more details. The strangest thing was that the dream didn’t scare me that much at the time – as it was a trailer, I was more impressed by its scariness than scared by it – but the more I thought about the dream the following day, the more it freaked me out. Posting it here in the hopes of exorcising it from my mind, so apologies if it latches on to yours.

The actual Singing Kettle people apparently saw our dirty Singing Kettle parody. This was mentioned in a recent issue of the Scottish Sun (the article is also online but I won’t link to it because I feel icky enough just being mentioned in a tabloid). The main emotions this conjures up are the customary shock and disbelief that come with my stupid little world making momentary contact with the larger, real world, and some to-be-expected traces of shame. At least they were nice enough to laugh it off, so we can probably stop worrying about being sued now!